The Memorandum of Partnership between the "City of Content" Civil Society Association and the Vinnytsia City Council was signed on July 2nd. The government and public representatives agreed to establish a platform for dialogue, cooperation and close communication for the city's development.

The Memorandum provides for cooperation in the following areas: the "community - government" interaction, the development of civil society in Vinnytsia and the search for global content for the development of the city. The main principles to be followed by the signatories of the Memorandum are the recognition and observance of human rights, justice, tolerance, gender equality, political impartiality, non-discrimination and recognition of diversity.

As part of the signing of the Memorandum, it was agreed to establish a Partnership Council, which should include 5 representatives of public organizations and 5 representatives of the city council. This collegial body should meet regularly (at least 4 times a year) to exchange information, synchronize plans and intentions in search of common points of cooperation for the development of the city.

The parties also agreed on the following joint activities:

- conducting public consultations on the problem-solution processes of the city development;

- public involvement in the development of city programs;

- mutual support in the organization and implementation of projects within the Partnership.

“I consider it to be a great achievement for the community that we were able to establish cooperation with public organizations in Vinnytsia. I am convinced that we should not stop there, we should move forward because the main goal is the development of our community, which concerns various spheres of life. And we must work together to build our partnership for the better quality of close interaction and dialogue. I hope that the Memorandum of Cooperation will give an additional impetus to this work. The role of the NGO sector is extremely important in the development of civil society. We must work together to develop innovative forms of interaction. It should be regular communication, consultations, involvement in all processes related to the development of the city. Especially when we face a large-scale important task of developing a strategy for the development of the Vinnytsia city united territorial community for the next 10 years’’ -  Vinnytsia Mayor Serhii Morhunov noted.

“The signing of the Memorandum today is a logical continuation of the cooperation and interaction of the active community and the city council of Vinnytsia, which began with a joint and successful project - the creation of the Hub ‘City of Content’ on the Pushkina street, 11. This example proved that constructive work together gives a good result: in 2.5 years, more than 900 events of public organizations, international institutions and authorities took place in the Hub. Thousands of active Vinnytsia residents and officials got to know each other, learned a lot of new information about their city and opportunities to contribute to its development, as well as many ideas and projects were conceived here’’ -  Alina Dyachenko, director of the Institute of Urban Development.

“Our city is lucky - we have a very strong civil society. It is important to involve this expert potential in the development of the city through participation in the development of municipal programs and projects, as well as attracting additional funding through international organizations. The next step after signing the Memorandum should be a meeting of the Partnership Council and the first important topic for discussion we offer tools for citizen participation in the decision-making process. This will be the foundation for further effective cooperation’’ -  Olena Danilova, Head of the ‘City of Content’ NGO Association, commented.

The text of the Memorandum was developed by members of the ‘City of Content’ Association and representatives of the Institute of Urban Development with the support of the International Technical Assistance Project ‘Partnership for Local Economic Development and Democratic Governance’ (PLEDDG). Representatives of non-governmental organizations that are members of the Association and are members of the Coordinating Council also took part in the signing of the Memorandum: Halyna Seheda, a representative of the Podolian Agency Of Regional Development, Yurii Stepanets, head of the "Nashe Podillya" NGO, and Liudmyla Hryhoruk, director of the Department of Legal Policy and Quality.

Vinnytsia already has significant successful experience of cooperation between the city council and public organizations: on the initiative of the latter, the city operates within the program of "Community for Equality", and the concept of e-democracy has been approved, as well as the "Vinnytsia - a comfortable community for people of respectable age" program is under public discussion. The public was also actively involved in the development of the Concept of Integrated Development "Vinnytsia 2030".

Another successful case of government-community interaction is the Hub 'City of Content', which has been operating since the beginning of 2018 and is used by NGOs, charity foundations, initiative groups, activists and institutions for events, as well as a platform for discussions and debates on city development. It was on the basis of the Hub that the public association 'City of Content' was formed, which today unites 42 NGO and is open to new members. 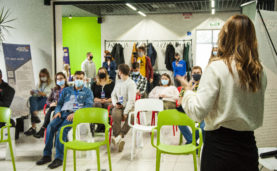 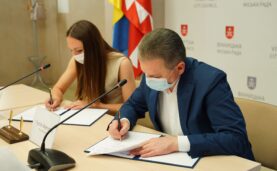